Extended Trading
Some of our supermarkets, major retailers and Reading Cinemas trade beyond centre hours. For more information on specific stores, please contact the store.

Recipe of the Month

Method:
1. Smash prawns with the side of a knife.
2. Mix together in a large bowl with chicken mince, then add remaining ingredients.
3. Mix in one direction until sticky and springy.
4. Place 1 tsp of filling in the middle of pastry and fold, pressing and crimping the edges into the middle. Repeat with remaining ingredients.
5. Place 1 tbsp cooking oil in a non-stick frying pan and heat oil over medium heat. Add dumplings and pan fry until slightly golden. Add ½ cup hot water, cover with lid and cook until all the liquid is absorbed.
6. Remove lid and cook on medium low until the bottoms crisp up.
7. Serve with dipping sauce.

Market Place is located within our Level 3 Fresh Food Market.

With a wide array of the freshest locally sourced produce, you are sure to find your favourite fruit and vegetables and discover many more!

Be sure to check out The Market Place Halal Butcher inside the store on your next visit. 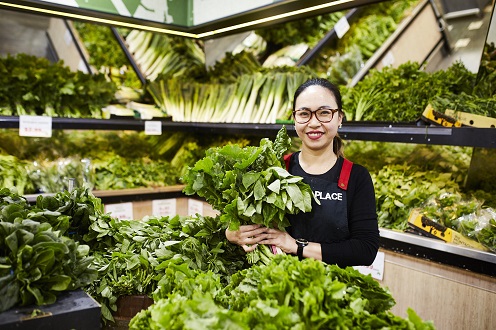 Thank you for signing up to  our VIP Subscription!

Connect with us for the latest sales, offers & events

Thank you for signing up to  our Little Munster Kids Club!

All Little Munster Kids get invites to our special kids’ events and fun activities! It’s free and easy to join for kids aged 0 to 12.